Getting to know Pacific Northwest nature: a tour with Portland’s Volcano Lands

Posted on September 16, 2014 by darwinsbulldog

I’ve been a reader of biologist Ivan Phillipsen’s blog Wild Pacific Northwest ever since I first came across it. He exudes a love and passion for the nature that surrounds us, and the site contains a wealth of information on specific nature topics (most notably profiles of representative species) as well as stellar nature photography.

Earlier this year I learned that Ivan and a biologist friend had started their own ecotourism company: Volcano Lands (Facebook/Twitter).

In their twelve-passenger van, they take tourists and Portlanders alike to many of the natural destinations that make this region of the world so special: the Columbia River Gorge, Tillamook Bay, the Northern Oregon Coast (Cannon Beach/Ecola State Park), Mount St. Helens, Silver Falls State Park, on a birding adventure in Portland, a wildflower excursion in the Columbia Gorge, Saddle Mountain, and Sauvie Island.

Patrick began to hunt for treasure as soon as we got near the ocean’s edge, Cannon Beach

Recently, the four us were fortunate to go along on a tour of Cannon Beach and Ecola State Park. We were joined by a local photographer, and a family from out-of-town (a mom and two daughters that needed something to do for the day while dad was having a job interview).

Catherine and Afton at Cannon Beach

We have been to Cannon Beach many times before, but this time was different. We had our very own naturalist to share his knowledge of the natural history that could be seen there.

Ivan teaches about the birds that live on Haystack Rock

Looking at some of the birds that inhabit Haystack Rock through a scope was very cool, as well as learning about the geological forces behind the rocky and weathered landscape.

Death on the beach: a common murre and a double-crested cormorant

My son and the two girls had fun exploring the nooks and crannies of Sitka spruces on our hike down a trail to Indian Beach, and there too spent a good time getting dirty and playing in the water of a creek leading into the ocean, Afton included!

Ivan looks on at Patrick and this cool caterpillar he found on the trail to Indian Beach, Ecola State Park

Afton joining me along the trail to Indian Beach, Ecola State Park

Catherine and Afton watch the waves come in and out at Indian Beach, Ecola State Park

Pelicans above the waves at Indian Beach, Ecola State Park 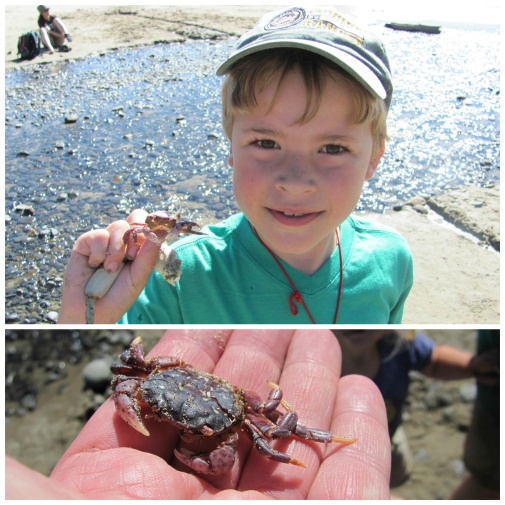 We enjoyed the sun, some cool ocean breezes, the views, and the lunch that Ivan provided. Even better, no driving allowed for a more relaxed time and ability to look at the windows during the drive rather than focusing on the road. 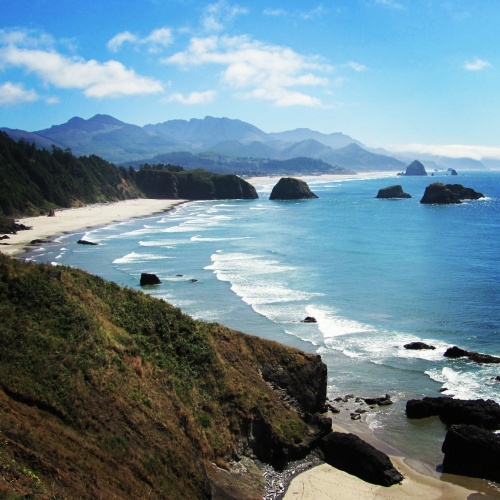 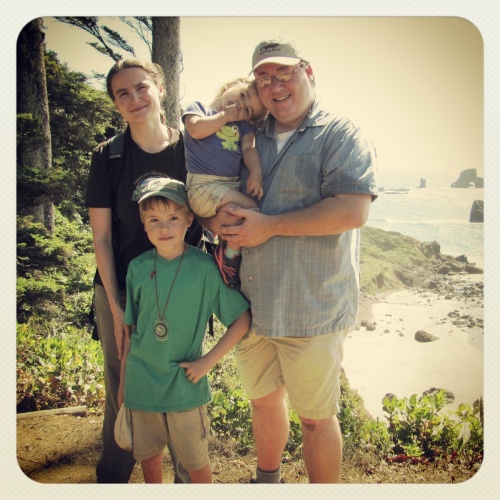 The four of us on the trail heading down to Indian Beach, Ecola State Park

For those visiting the Portland area or even those who already live here, I highly recommend booking a nature tour with Volcano Lands! Visit their website for trip details (such as what to expect for hikes and certain age requirements) and to view their calendar of upcoming trips.

2 Responses to Getting to know Pacific Northwest nature: a tour with Portland’s Volcano Lands