Posted on October 19, 2016 by darwinsbulldog

Earlier this year, my family visited Oceanside Beach on the Oregon coast. We came across several of these little critters, burrowing down into the sand after a wave recedes. 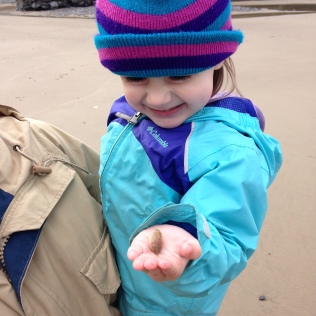 A new book tells me that they were mole crabs (Emerita analoga), which rest in the sand rear end down and its use their hairy antennae to catch food particles. 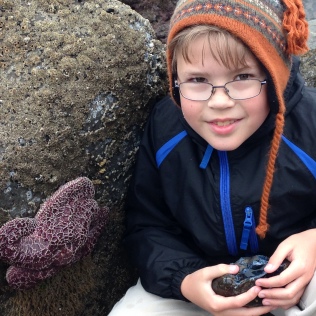 And this sea star my son admired, it’s called an ochre sea star (Pisaster ochraceus), a keystone species which can range in color that unfortunately has been suffering from a disease called “sea star wasting syndrome.” If you see an ochre sea star, that’s great; if you a lot of them in one spot, that’s wonderful. When on the rocks in tide pools, they are feeding on mussels, limpets, and other mollusks.

On a more recent trip, this time to the tide pools of Cobble Beach at Yaquina Head Outstanding Natural Area, we spotted these little green guys: 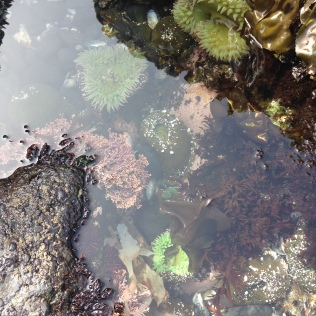 Not surprisingly, they are simply called simply green sea anemones (Anthopleura xanthogrammica), which eat small invertebrates and fish that they grab with their tentacles. And this little crab was the highlight of my kids’ time exploring that morning: 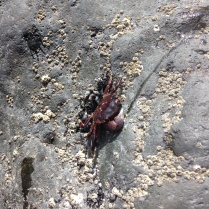 It’s a crab – obviously! But this particular one, this new book tells me, is a purple shore crab (Hemigrapsus nudus), which can also vary in color, and has hairless legs and dark spots on its claws. They are quick on their legs to avoid predators such as gulls.

My kids and I absolutely enjoy exploring at the coast. And I’ll definitely slide this new book into my laptop bag on future trips: 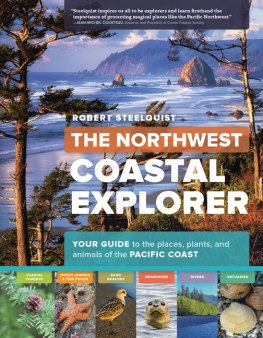 Robert Steelquist, The Northwest Coastal Explorer: Your Guide to the Places, Plants, and Animals of the Pacific Coast (Portland, OR: Timber Press, 2016), 284 pp.

Publisher’s description The Pacific Northwest coast is one of the most spectacular corners of the planet. Its magnificent terrain, unique plants, and abundant wildlife make it an explorer’s paradise. Author and local expert Robert Steelquist knows every nook and cranny, and is right by your side, pointing out the natural wonders casual visitors often miss. Organized by habitat, the book profiles easy-to-find plants and animals in each environment, and reveals insider location tips—such as where to find bald eagle habitats and wild stands of carnivorous plants. Weekend trip suggestions target the best of coastal Oregon, Washington, and British Columbia. The Northwest Coastal Explorer is a treasury of experiences to delight every seaside adventurer.

But the coast is more than just what you might find exploring in tide pools. Six coastal environments are described, with short entries on the likely flora and fauna you’ll see: Coastal Forests, Rocky Shores and Tide Pools, Sand Beaches, Nearshore, Rivers, and Estuaries. The author’s photographs are included throughout. And a section called Getaways describes seven short trips one can take in the region to see “the best the coast has to offer.” The Northwest Coastal Explorer is a great text and image companion for, well, “the Northwest coastal explorer.”