Posted on September 12, 2017 by darwinsbulldog

Not every child can sit still in a classroom setting all day long. Children need to move their bodies and explore their environment.

A new book from the Yosemite Conservancy follows young Rodney, an elementary-grade student who just can’t remain at his desk. and focus on what the class is learning. 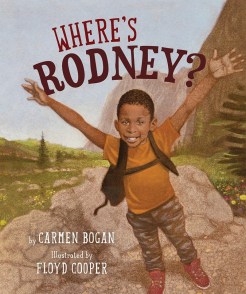 Publisher’s description Rodney was inside, but he wants to be outside. Outside is where Rodney always wants to be. Rodney is that kid who can’t sit still. Then Rodney gets the chance to be more outside than he’s ever been before. And that makes all the difference.

This is a charming story – a boy has difficulty focusing and remaining at his desk at school, but is completely in tune when outdoors. As the environmental educator Erin Kenny said, “You can’t bounce off the walls if there are no walls.” Children are not meant to be confined to indoor spaces. And it’s a notion that I wish more teachers and school administrators would grab on to and move their students outside for greater portions of the school day (it’s surely a reason many parents opt to homeschool, unschool, or wildschool their kids, or send them to nature-based preschools or forest schools in their younger years).

Many teachers DO know the benefits of increased time outside, for play and instruction, yet are held back by the school system that wants them to push more and more work on students to ready them for standardized testing. But, students can and do learn subjects better when outside and can be more engaged in the subject at hand.

In this book, Rodney is asked during class what the word majestic means. He doesn’t know, and the teacher ends up telling him.

Then, after exploring all there was to see during their field trip (to Yosemite, it appears), his teacher asks Rodney if he liked the park. His answer: “It’s majestic.” It’s a simple yet powerful message: put learning outdoors and everyone will benefit from it!

This entry was posted in books, education, Uncategorized. Bookmark the permalink.